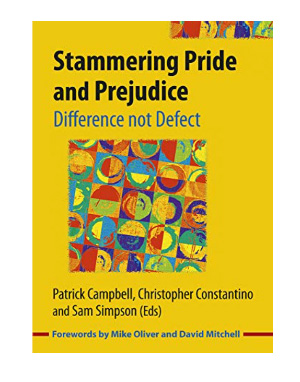 This is the continuation of a series of reviews of selected essays in the book, Stammering Pride and Prejudice: Difference not Defect.  See the first review here. The second piece entitled “Scary canary: Difference, vulnerability and letting go of struggle”, is a beautifully written essay by Katy Bailey,  a woman who takes a different approach to her stuttering after years of therapy.

Bailey discusses stuttering in terms of the “social model”, a perspective that frames the disability dimension as separate from the impairment itself, and caused by societal discrimination, barriers and negative attitudes. She uses the “canary in the coalmine” metaphor: miners used to bring a canary in a cage into tunnels they were digging because they could detect the presence of poisonous gas if the canary stopped singing and died.  Likewise, to the degree that a person who stutters feels the need to stop talking in a social environment indicates the presence of an “unsafe” or unaccepting environment.

The struggle is part of the disability

Bailey describes the experience of blocking and stuttering and its profound effect on her, and concedes that stuttering is challenging for the listener as well, even those who are understanding. Many people who stutter struggle not to stutter, compounding the difficulty, awkwardness and emotional stress. This struggle is often seen as part of the impairment, when, in fact, as Bailey emphasizes, it is part of the disability aspect.

Bailey’s experience of speech therapy and its pursuit of fluency never helped. Nor did the well meaning attitudes of parents, teachers and speech therapists, who discreetly yet perceptibly conveyed a negative reaction to her stuttering. It’s this attitude of others that, in accordance with the social model, can be changed by people who stutter finding, and using, their own authentic voices. Therapists should, in her view, teach the removal of fear of the impairment and reduce the struggle for people who stutter.  People who stutter need to work on their own “internalized oppression.”

On a visit to Jamaica, a country whose people have a distinct culture and social attitudes different from her country of Great Britain, she found a more receptive and often positive response to her stuttering, something that made a world of difference to her own reactions and feelings. In fact she even found her stuttering alleviated in a less judgemental environment.

After years of therapy and struggling against her stuttering, Bailey found herself wondering what her real voice sounded like. She encourages people who stutter to “find their basic level of disfluency” and, going out into the world, normalize stuttering by talking with their real voices.  She writes, “I have let go of my inflated ideals of fluency, let go of my gold medal hopes in those elite fluency sports and accepted my different sounding speech: that which I previously considered bad.” It is okay, in fact necessary, for people who stutter to proudly be themselves.

Next month:  People with Stigma by Patrick Campbell