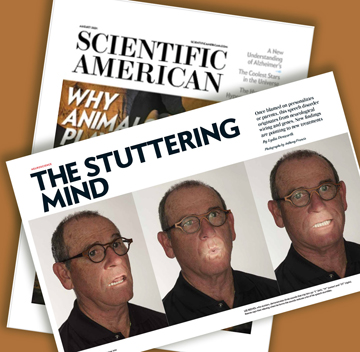 The Magazine Scientific American features an in depth article about stuttering in it's August issue. The article describes some of the latest scientific discoveries, and interviews researchers and people who stutter, including CSA Board member, Catherine Moroney.

Today, misconceptions about stuttering are fading. It is no longer believed that stuttering is caused by nervousness, intellectual disabilities, or bad parents. Still, as the genetic and neurobiological causes of the condition has been established and progress is being made, there is a lot researchers don't know.

Why do some children grow out of stuttering and others don't? Dr. Dennis Drayna's work on the genetic predisposition to stutter is discussed. While genes associated with stuttering have been discovered, it's not clear exactly how those genetic mutations impact a person's speech. Dr. Gerald Maguire, (well known to the Canadian Stuttering Association for his regular participation in our annual conferences!) is also interviewed for the article, and discusses his ongoing research in how studies of brain activity in people who stutter could lead to possible pharmacalogical treatment.

The article provides a useful summary of the scientific research into the "stuttering brain" and the possibilities of understanding the condition better. Using mild electric currents on the brain might also be a treatment, although it is in an early phase. The article comments that the approach to speech therapy has shifted in recent years from "eradicating" stuttering by practicing fluency to managing and accepting it.

Canadian Stuttering Association board member Catherine Moroney, originally from Montreal but currently working in California, is interviewed for the article. She discusses the challenge of growing up with a severe stutter, but thankfully it did not interfere with her career. She now works at the NASA Jet Propulsion Laboratory as a physicist and software engineer. The drug Olazapine helps her manage her stuttering day to day. But the biggest help, she says, comes from her involvement in the stuttering community in both Canada and the U.S. that she considers her family.