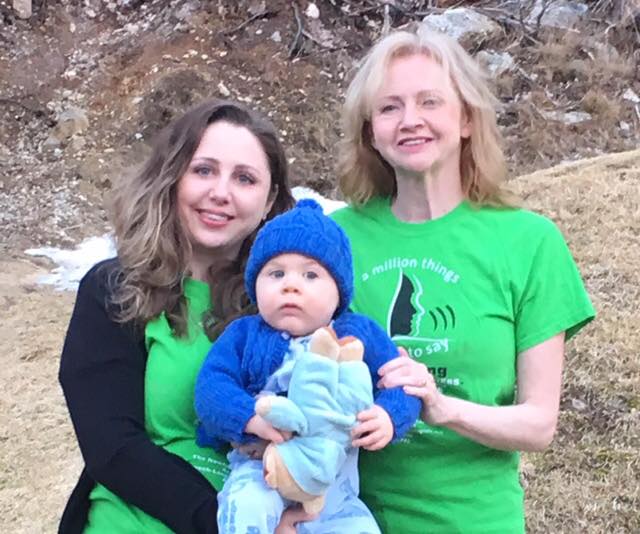 Allison, left, with her son and motherMy name is Allison and I’ve stuttered for as long as I can remember. Stuttering ran in my family, though not all stuttering is hereditary, and I was three years old when I had my first speech therapy session. I was lucky to have supportive parents by my side and as a child I was confident and outspoken despite my disfluency. I advocated for myself and demanded to be treated with respect. As I got older the struggles involved with speaking, both physically and emotionally, began to take its toll. Being brave was exhausting. After a decade of unsuccessful therapy the courage I displayed as a child disappeared and I gave up on ever speaking fluently. This coincided with adolescence as fitting in with my peers became my priority. I fit in better by being silent.

Being a ‘covert stutterer’ came with its own challenges, largely related to self-esteem and anxiety. I had so much to say but was afraid to speak. As I trudged along with this poorly hidden secret I continued to face many challenges, including difficulties with school, employment, and relationships. I was a smart, educated young woman who was stuck in a world that didn’t understand. A world that interrupted me, ignored me, denied me well deserved opportunities. That hung up on me and asked if I was stupid. That laughed in my face.

Eventually I had enough of hiding my stutter. I slowly became more confident in myself and accepting of my disfluency while also becoming accepting of the harsh realities of the world I was living in. It wasn’t fair but it was what it was. Then two amazing things happened: I became a mother and I was invited to become a founding member of the Newfoundland and Labrador Stuttering Association My mom Judy, one of my biggest supporters and life’s advocate, was also invited to join the NLSA. At first I questioned if I had the time to meaningfully contribute to this association just after having a baby. Then I looked into my son’s big blue eyes, my eyes, and thought about him developing a stutter. I thought about people laughing at him, of him getting bullied in school. I thought of him losing a job or a promotion. Of people thinking he’s slow or stupid. Thinking about him growing up with a stutter in the same world as I had, where some teachers were cruel and some doctors were clueless, where therapy access is laughable and funding is almost nonexistent, made the decision easy. As a mother and a grandmother we knew we had to try to make a difference for our precious boy. To increase awareness, education, and respect for people who stutter. To reduce bullying by children, adults, and employers. To make therapy more accessible and to make society more accepting.

As I look into my baby’s big blue eyes I know that even though I’d give anything for him not to stutter, if he does he deserves to grow up in a better world than I did. So both my mom and I decided to make a difference by joining the NLSA. Not just for my son but for all children. For the next generation of people who stutter and for every child who is different. Because making the world a better place for our children starts with us. And it starts today.

Allison O’Brien lives in Conception Bay South, Newfoundland, with husband Jason and baby Levi. She is a NLSA founding member and Board Director. For more information on the NLSA or Allison’s story please contact her at allison224@gmail.com.
Last updated: January 3, 2022