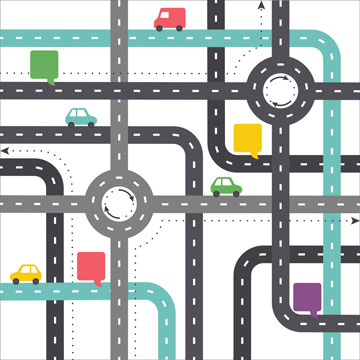 This is a review of the article: "Structural connectivity of right frontal hyperactive areas scaled with stuttering severity". from BRAIN: a journal of Neurology, 2018 issue 141, pages 191-204. (Authors listed at end of article)

Imagine you are driving a car. It seems to be a good fast car, and you’re happily driving down the highway. But when you slightly decrease your foot on the gas in order to slow down, the car stops entirely! If you try to make a ninety-degree right turn onto another road, no matter how far right you turn the steering wheel, the car will only turn twenty degrees, or ten degrees, or maybe won't turn at all! Sounds like a bad dream, doesn’t it?

Modern medical technology, such as PET and MRI scanning, allows doctors to peer inside peoples’ working brains, allowing for advanced insight into what causes, and could potentially help, conditions like stuttering. The research paper studied here builds on previous research that examined brain anomalies, in both structure and function, of people who stutter compared to those who do not. Research such as this can lead to greater understanding of the specific neural pathways that contribute to stuttering, and potentially lead to treatment such as electric brain stimulation which is already being tested.

Speech is such an automatic thing it is difficult to analyze. The fact is, speaking involves a very complex set of movements and extensive neural activity. Like driving a car, it is a “stop and go” activity, involving both the initiation and the inhibition of movement, and switching to different types of movement. In the case of speech, this is changing from one sound to the next, and stopping and starting breath and sound between words and thoughts. Our brains activate different neural pathways for “starting” as opposed to “stopping”.

Speech is a “stop and go” activity, involving both the initiation and the inhibition of movementIt is already known that one significant way stuttering brains differ from non-stuttering brains is a higher degree of right hemisphere activity during speech. Neural pathways in the left hemisphere have been observed to be degenerated, and the extent of this degeneration correlates with the degree of stuttering severity. Some neural connections, mainly on the right side, are overactive. While increased connection strength can sound like a good thing, it can be a negative if it is putting a rapid fine-tuned sequence of actions off balance.

The basal ganglia is a region of the brain situated in the base of the frontal region. Activity between elements of this region via neural pathways is what controls our movement and the motor activity that produces speech. One neural pathway within this region connects to a part called the subthalamic nucleus. This nucleus controls selection of the specific motor activity and inhibits the activity of those certain muscles.

One of the main findings of the study is the overactivity in the connection strength of the subthalamic nucleus. This overactivity suggests an “overly active global response suppression mechanism” in stuttering. It is suggested that this part, due to being overactive, goes haywire and, like the car that can stop but not slow down, causes global inhibition in the entire system rather than a specific inhibitory response. This overactive inhibitory response is part of what causes blocks and involuntary prolongation and repetition that characterizes stuttering.

The research found differences in the brains of people who stutter not related to speech behaviour. Areas associated with motor imagery, imitation and action observation, memory control, task switching, cognitive flexibility were also overactivated compared to non-stutterers. The researchers link these neural circuits to “proactive inhibition”, such as the anticipation of stuttering that causes coping and avoidance behaviours in people who stutter. This research is “the first to bring such a brain-behaviour relationship” into awareness.

This is a solid research paper that has the benefit of a good sample size: 31 adults who stutter and 34 controls who do not stutter participated in the study. The adults who stutter completed the OASES (Overall Assessment of the Speakers Experience of Stuttering) questionnaire to determine the impact of stuttering on their lives. As well, the SSI-4 (Stuttering Severity Instrument) showed that fifteen participants showed “very mild” to “mild” stuttering, seven were “mild”, two were “moderate”, two “severe” and two “very severe”. They were all right handed and were not taking speech therapy at the time of the research. Three different types of MRI (magnetic resonance imaging) were used in the study for brain scanning, including types of imaging that specifically determine the strength of neural tracts and white matter connecting tissue.