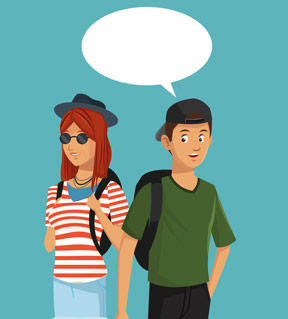 Ask anyone and they’ll likely tell you that being thirteen is an incredibly difficult time. There is so much going on at that point in a kid's life. We are growing at a pace that's impossibly fast. The girls seem to be WAY ahead of the boys. Us boys are standing on the opposite side of the dance floor, teetering between growing tall and getting mustaches and not being able to talk without our voices cracking. Needless to say, things are a little socially awkward at this point in our lives.

When I was 13 years old, starting high school, my height hadn’t exactly caught up with my weight, my voice sounded like a squeaky toy left in the pool too long, and I was incredibly terrified of talking to girls. Talking to girls is a right of passage, something we all have to do, just toughen up and just get it over with. But it wasn’t easy! How do you talk to someone you have a crush on? You don’t want them to know you “like” them but at the same time, if you never talk with them how will they ever know? What do you say when you finally do talk to them? Do you try and be funny? Will they find your sense of humour funny?

Should you do that thing where you make fun of them to let them know you like them? Many kids simply have no idea what to do. The biggest issue for me was that not only did I not know what to do, but I also didn’t really know if I was capable of doing what I already didn’t know how to do (take as long as you need to wrap your head around that one). I feared that my stutter would be the thing that everyone would focus on, that I wouldn’t be able to say what I needed to, and where would that leave me? Standing there with no option other than to run away. So for the majority of my adolescence I never put myself in the position to have to run away.

Despite all of this, the challenges I faced, the difficulty of going years without being comfortable talking to new people, I wouldn’t change a thing. Trying to build up that courage, trying to convince myself that it would be okay, and waiting to find someone who I could feel comfortable talking to led me to having some of the best relationships a guy could ask for. If you look back on your younger years, take a good look at who your closest friends are now and think about the foundation of the relationship. For me it is made up of trust and comfort. That foundation can take a while to build, but its strength today hails from the challenges leading up to now. So whatever your challenge, whatever you fear, don’t rush into it, don’t force yourself to do something. Rather, take all the time you need to do what you don’t know if you can do, and maybe you’ll discover that it’s really not so bad after all.

Chris Chiarelli lives in Vancouver, BC. He has his own blog at stammeringfool.com