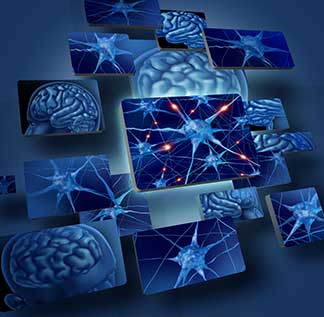 Magnetic Resonance spectroscopy (MRS) is a diagnostic test for measuring biochemical changes in the brain. An MRS scan is conducted on the same machine used for Magnetic Resonance Imaging (MRI). It provides chemical information on metabolites (brain chemicals), and gives more information about the tissues of the human body, and not just the structure.

In 2014 MRS was used in a study to examine the brains of children with Tourette syndrome. Researchers were surprised at the findings of high levels of the brain chemical GABA, an inhibitory neurotransmitter, something that could not be determined by a basic MRI scan. This informed options for treatment, both pharmacological and drug-free approaches.

Recently the scanning technology was applied to stuttering. In a recent study the brain regions in both adults and children who stutter were examined. The research, performed at Children's Hospital Los Angeles (CHLA), examined 47 Children and 47 adults who stuttered, as well as a group of fluent speakers.

Compared to the fluent group, the scans showed change in brain circuits that control speech production and circuits that support attention and emotion. This reinforces previous research, but indicated more extensive changes than had been determined. Also, the study revealed that the degree of differentiation in the brain circuitry correlated with the severity of the person's stuttering.

Significantly, the research found differences in the scans between adults who stutter and children who stutter. Further research along these lines could determine which children who exhibit stuttering are less likely to recover.

This new research provides valuable information to help researchers conduct further studies, to learn more about stuttering and how it develops in children, and to possibly improve the development of pharmacological treatments for stuttering.

Journal of the American Medical Association