What causes stuttering? The Valsalva Hypothesis 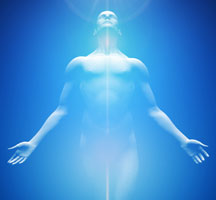 A Review of the book Understanding and Controlling Stuttering: A Comprehensive New Approach Based on the Valsalva Hypothesis, by William D. Parry, CCC-SLP. 3rd edition 2013.

William D. Parry is a former trial lawyer whose life has been severely affected by stuttering. Thirty years ago, after trying every method of speech therapy under the sun, he started to research the subject of stuttering himself to better understand the condition and find a treatment that would work for him. Eventually he published a paper in a scientific journal outlining what he saw as the cause of stuttering and a way to control it. In order to have the credentials to perform empirical research and test his hypothesis, he went back to graduate school – this time to become a certified speech-language pathologist.

Today Parry is a published researcher and practicing speech-language pathologist who has helped hundreds of people who stutter. His approach is based on a hypothesis that was supported through scientific study. According to this research, stuttering is caused by an involuntary physical reaction to stress known as the Valsalva Maneuver.

Named for an 18th century Italian doctor who first identified it, The Valsalva Maneuver is an involuntary physical response enacted when a person is in a state of fear and/or preparing for physical exertion, such as when lifting a heavy object or running faster. It is also employed to expel things from the body such as during bowel movements, and women use it during childbirth. The trunk of the body stiffens, the abdomen tightens, air pressure is built up in the lungs, and the larynx closes.

The nature of human speech

Speech is one of the most complex human activities, but it is also automatic, requiring little conscious thought or effort. When most people prepare to speak, they don't anticipate physical exertion or strain. People who stutter, on the other hand, have been conditioned since childhood (when they first started experiencing disfluencies) to think of speech as something difficult. Therefore, when a stutterer prepares to speak he automatically activates a maneuver that his mind believes will help. In fact, the Valsalva response makes speech more difficult as it blocks the larynx and stiffens the abdominal muscles, cutting off airflow, and, in Parry's hypothesis, is what causes stuttering. 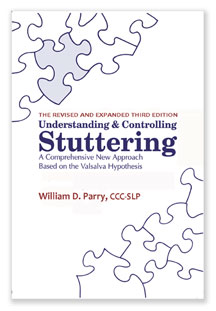 Speech therapy has existed for a long time, with varying degrees of success in treating stuttering. But there has never been an overall theory of what causes the condition. By identifying a specific physical force that is causing a stutterer's disfluencies, a treatment can be directly targeted to reduce its interference with speech. Although the book is not meant to be a substitute for therapy with an SLP, he gives some exercises and practice routines to try out. Parry's therapy regimen involves reversing negative expectations, relaxation techniques, diaphragmatic breathing and a focus on vowel phonation.

William Parry made a presentation at the 2014 National Stuttering Association conference. Not long ago he successfully treated a U.S. Navy SEAL for stuttering. He found that some aspects of military training related to his theories about controlling fearful thoughts and the inhibition of the Valsalva response. Specifically, the SEALS training program teaches techniques to help the brain's frontal lobes (the "thinking" part of the brain) override the stress hormones triggered by the amygdala (the "fear" centre). The SEAL credited Parry's therapy with helping to get his stuttering under control.

William D. Parry's book about the theory and practice of the Valsalva Hypothesis is concise and readable. His description of the stuttering experience and his survey of speech pathology and the current research will resonate with anyone who stutters who has been through therapy. He certainly makes a good case for the Valsalva Maneuver to be at least part of the puzzle of what causes stuttering.