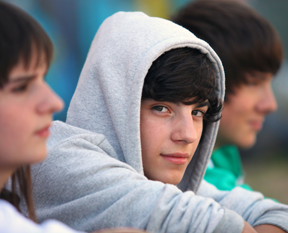 A review of the paper: The Effectiveness of intensive, group therapy for teenagers who stutter by Jane Fry, Sharon Millard and Willie Botterill, of the The Michael Palin Centre for Stammering, London, UK published in the International Journal of Language and Communication Disorders, Jan - Feb  2014, VOL. 49, NO. 1, 113–126

The teen years are critical for development of personality and a sense of self for an individual, and lays a foundation for that young person’s adult life. It is also a time of increased self-consciousness, self evaluation, and social identity.  It is well known that teens who stutter are more prone to social anxiety, and it can be a challenge to provide treatment for them at this critical juncture in their lives.

This research paper builds on previous research into teens who stutter and their response to intensive treatment in a group therapy setting. This area is underresearched, and there are problems with getting and retaining participants for research studies.

This particular research study duplicates a previous study in 2009, that investigated the results of a therapy program on both “overt and covert” features of stuttering, addressing not only the impact of stuttering behaviour but also of the psychological and emotional effects of stuttering.

Previous research saw stuttering decrease throughout the course of treatment. Self-efficacy (confidence) about speaking increased, and there was a decline in negative thinking, or "fear of negative evaluation". This study sought to duplicate these results, to strengthen the validity of the conclusions and shed more light on the most efficious way to provide speech therapy for teens who stutter.

Initially, there were five teens in the study, but two dropped out in the first phase. Of the remaining participants, two of the boys were seventeen and one was eighteen years of age. The eldest had received no therapy and his stuttering was mild, the other two were more severe and had received therapy.

In addition to speech management skills (speech modification and fluency shaping), Cognitive Behaviour Training (CBT) and communication skills were also a part of the treatment. CBT is therapy that addresses the relationship between thoughts and feelings and how they effect our behaviour. Successful use of CBT has been shown to reduce social anxiety, and help the subject control automatic negative thinking.

Communication skills development involves, first of all, reducing avoidance behaviours when it comes to speaking and interacting with others. Also basic conversation skills, such as listening, making eye contact and taking turns speaking are practiced.

The point of this approach to therapy is that the focus is not just on achieving fluency alone. It acknowledges that other valuable gains can be made through treatment besides fluency. Self-reporting questionnaires were used to report the progress in these areas not involving speech fluency. These questionnaires addressed self-efficacy (confidence), fear of negative evaluation (negative thinking), and other psychological responses to stuttering.

Design of the study

The research was in four phases. The first phase was to establish a baseline for each participants level of stuttering and his emotional state. A two week intensive course in speech training followed. This was followed by a five week self-maintenance treatment period, and then a ten month period where the subjects had four follow-up meetings.

Completing the self-reporting questionnaires and making video recordings were essential to the research, and participants did both regularly throughout the study. The videos consisted of them speaking both in conversation with someone and reading aloud to themselves. Researchers then had evidence of the patient’s stuttering behaviour to compare to the questionnaire results of the psychological “covert” states of the subject.

In the final stages of the study, one of the participants stuttering behaviour actually became worse for a short time. Yet during this time, his confidence level remained the same. This implies that “he gained broader skills from the therapy programmed than speech management skills alone, and as a result was more psychologically resilient in dealing with short-term variations in his fluency.”  This is important as it is well known that stuttering in any individual varies in intensity over time, and is something a person who stutters must adapt to.

Some results of the psychological testing was surprising. The most severe stutterer tested the highest for self confidence, and his data overall revealed he was less effected by his stuttering than the other two. The most mild stutterer started out with a lower self confidence rating than the other two, and his fear of negative evaluation was highest, suggesting his stuttering was having a huge impact on him. He commented during the intensive therapy phase that he had a hard time slowing down his rate of speech. This supports previous findings that covert features of stuttering are just as important to address. Like the previous studies to which this refers, the therapy involves focusing on more than just fluency. It examines psychological responses to therapy, and investigates individualized treatment for different teens.

The drawbacks of this study are the small sample size and the lack of complete data for two of the participants. It is a good basis, however, for further study. The participants showed reduction in stuttering and positive changes in emotional reactions to their own stuttering. As the researchers conclude, "Certainly further research is needed to determine which young people are most likely to benefit from such a holistic approach to therapy, and what alternatives and modifications should be considered for others." This approach is a welcome alternative to a one-size-fits-all approach to therapy for young people, and sees them as different people with individual needs.