The Other Side of the Block: The Stutterer’s Spouse. By Julia M. Boberg and Einer Boberg, from Journal of Fluency Disorders 15 (1990), 61-75

The impact of stuttering on adults who stutter and their partners. By Janet M. Beilby, Michelle L Byrnes, Emily L. Meagher, J. Scott Yaruss, from Journal of Fluency Disorders 38(2013) 14-29 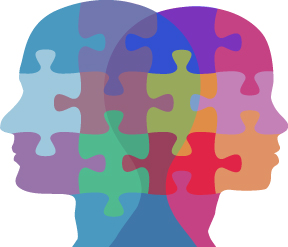 In the realm of information about stuttering, many perspectives have been studied, from that of parents of children who stutter to professionals in the field. However, there is scant research exploring the effects of stuttering on the life partner of a person who stutters, and how that relationship is affected.

In 1990, a study was conducted on this topic through interviews with 15 wives of men who stuttered. This report was called The Other Side of the Block: The Stutterer’s Spouse. The wives were asked a series of questions about how they met their husbands, their first impressions, and the impact of his stuttering on various aspects of their lives.

Only one wife consulted a speech pathologist before the marriage, to ask how best to deal with this unique challenge in their relationship. Some problem areas reported by the wives were introducing their husbands to people, the restrictions on their social life, everyday tasks that always fell on her such as answering the phone, ordering in restaurants and asking for things in stores. Children were also an issue, as some of the men were so afraid their progeny would inherit the problem that they did not know if they wanted any. A few insisted on names for the children that they were comfortable saying.

One couple deliberately chose a small, informal wedding because the groom did not feel he could handle the pressures of a large traditional event. One man blocked severely during his wedding vows, and another had the minister speak in chorus with him as he made his vows, making fluency easier.

Three of the wives were more confrontational with their husbands and encouraged them to face their fears, one even recommending that he mention the fact that he stuttered when meeting new people, preparing them for his disfluncies. But most of the couples did not discuss the problem. In fact one couple went 20 years without mentioning it. When the problem was finally brought out into the open after years of silence, “it brought them closer, and enabled her to share burden that he had carried alone.”

When the husband took treatment, the wife was usually involved in it. However, one wife felt left out when he took therapy without her involvement and then joined a self-help group, not discussing it with her. The exclusion from it became a problem in their marriage.

All the wives in the study stressed that they were not embarrassed by their husbands, but said they were often embarrassed for them, because of listener’s reactions. They didn’t always express their feelings to their husbands for fear it would make things worse.  Five did not think that he was traumatized by his stuttering, and remained unaware of how he was influenced by it. But many wives did see their partners as inhibited by stuttering and often found it hard to express himself, but that they “loved the wonderful person trapped inside”.

Many issues came up in this study. Speech therapy was found to be more effective when the spouse was involved in it, and being open and talking about the stuttering problem could strengthen the relationship and made for better results. But not all of the couples were open with each other about the problem. Many wives were shocked to learn the extent that the problem dominated their husbands’ lives outside of the home, at work and in daily activities.

But this research examined the perspective of the non-stuttering partner. how is this effect different from what the stutterer himself experiences? What are the differences in how each partner experiences it?

Although there is the familiar list of famous people who stutter, stuttering spouses are not as well-known. The exception would be Annie Glenn, the wife of astronaut John Glenn, who was famous in the 1960s when he became the first American to orbit the earth. The event sparked a media frenzy and much public attention onto the astronaut’s personal life, including his wife, who all of a sudden found cameras and microphones pointed at her face. For Annie, who had a stuttering problem, it was especially trying. She went for treatment at Hollins Communications Research Institute in Ronoake, Virgina, and in this video her and her husband describe the changes it made  to her speech.

One thing the 1990 research did not explore is the possible discrepancies between the fluent spouse’s observations and responses with that of the stuttering partner. A more recent study, published in 2013, expands on the issues raised in this previous study. What specific experiences and themes emerge for both people stuttering? How are their experiences and perceptions different?

In the more recent study, 10 couples participated in the research. Nine of the stutterers were men, and one woman. They were all interviewed, and each filled out questionnaires. The questions asked were more specific, relating to speech therapy and how the spouse saw her/himself supporting their partner deal with their stuttering.

Both partners filled out the OASES, a specialized questionnaire developed to determine the complex effect of stuttering on a person’s life. An alternate version of the OASES form was developed for the partner of the stutterer, specifically for this study.

One theme that arose during the interviews was that of accepting stuttering, and that “everyone has weaknesses”. Most participants, both the stutterers and fluent partners, had a good understanding of the realities of speech therapy – that it does not offer a cure – and described it is a “lifelong journey”. One of the main benefits of it, in some cases, was increased confidence. “People really don’t care as much as you do about [stuttering],” said one of the partners who stuttered, who had chosen not to return to therapy. A man described an expensive intensive treatment course he had travelled to the states to attend, yet said “it worked for me for only a short time.”

One wife, found watching her husband’s first therapy session “distressing.” It was only then that she saw how hard he struggled with it and the hard work that would be involved in controlling it. When their son began stuttering, it was her “worst fears come to life”.

A couple of fluent partners admitted to being frustrated sometimes when their husbands stuttered, but also had admiration for them because of what they have gone through and continued to face everyday.  They acknowledged that it had been a problem professionally and socially. “He lives a sheltered life” one wife said of her spouse, “and doesn’t interact much.” Like in the 1990 study, many wives found social gatherings difficult, as they were conscious of how uncomfortable their spouse was. Likewise there was a theme of admiration for the stuttering partner.

All the fluent partners said they were not familiar with other people who stuttered until they met their future spouse, other than one or two classmates from grade school. The only fluent male partner in the study admitted during the interview to having once teased a classmate who stuttered.

As opposed to the earlier study, a greater percentage of the fluent partners saw the importance of talking about the problem, and not to let it fester and resentment to build up. In 1990, most of the wives respected what they saw as their husband’s desire to not speak about it.

More than half of the fluent partners found they had to make up for their spouses’ fears of communicating, such as his reluctance to use the phone. One wife thought sometimes it seemed like she “had to carry everything” and encouraged her husband “to do something” about his stuttering. Four of the ten fluent partners felt protective of their stuttering spouse in social situations, and stood up for him when it was necessary.

The majority of fluent partners definitely felt that the stuttering problem was a “shared experience.”

In almost every area, the stuttering and fluent partners had similar observations and feelings about how stuttering effected their lives and relationships. There was one major discrepancy, however, in the answers to the OASES questionnaire. The OASES study is a questionnaire to guage the full impact of stuttering on the life of a person who stutters. It documents multiple outcomes in stuttering treatment, and collects information about the totality of the stuttering disorder, including: (a) general perspectives about stuttering, (b) affective, behavioral, and cognitive reactions to stuttering, (c) functional communication difficulties, and (d) impact of stuttering on the speaker’s quality of life.

For most of these categories, there was little statistical difference in how the fluent partner viewed the issue compared to the PWS. But in the last section, the overall impact of stuttering on quality of life, the fluent spouse underestimated the effects of the problem, indicating that the spouse “may not be fully aware of the true extent of the adverse impact that stuttering may have”. This was similar to the first 1990 study where a number of the wives were not clear on extent of their husbands’ stuttering outside of the family context, such as at work.

Like the first study, this research showed that the spouse should be included in therapy, have knowledge of stuttering and full acceptance of the stuttering partner. Full treatment histories of stutterers should be explored before or during the treatment.