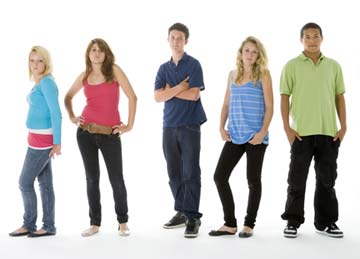 This is a summary and review, not a republishing, of the article "Changing adolescent attitudes toward stuttering", by Ken St. Louis and Timothy Flynn. From the Journal of Fluency Disorders, 2011, 110-121.

This review was originally published in the 2011 Winter edition of CSA Voices.

This article provides an excellent overview of how a survey technique, the International Project on Attitudes towards Human Attributes (IPATHA), can be used to determine the results of public education efforts aimed at improving attitudes toward stuttering.

In the study, researchers Timothy Flynn and Ken St. Louis arranged for a young person who stutters to deliver a humorous and informative talk about stuttering to classes of high school students. They also arranged for video presentations about stuttering, geared for this age group, to be made. In a third scenario, students were exposed to both oral and video presentations. The purpose of the study was to determine whether the attitudes of high school students towards stuttering could be improved by this exposure.

According to the results, attitudes were indeed shown to improve after an oral and/or by video presentation about stuttering geared to adolescents. The oral presentation, given in person by a PWS, was more effective in changing these attitudes than the video.

This study also determined that the attitudes of high school students toward stuttering were very similar to those of adults in previous studies.

Many studies based on application of this survey instrument (IPATHA) have been published with an international scope. For instance in Turkey, in probability or random samples involving the Public Opinion Survey of Human Attributes—Stuttering (POSHA-S) survey instrument, St. Louis and colleagues have shown that stuttering attitudes were virtually identical among sixth grade school students, their parents, their grandparents or other adult relatives, and their neighbours. These attitudes, in turn, were quite different from adult attitudes in the same Turkish city using the more popular ‘convenience’ samples – that is, friends, acquaintances, and so on, of the person collecting the survey data.

A carefully controlled study in Ottawa, Canada and Douala, Cameroon showed that results were far more similar between English and French administrations in each country than attitudes between the two countries. This study demonstrated that the POSHA-S can be translated into two languages with very similar results.

St. Louis has noted that if a self-help association wishes to get involved in a project to try to reduce stigma (and thereby bullying) in their country, he would be pleased to work with a task force to use the POSHA-S to evaluate the initiative. The POSHA-S is the only standard measure of stuttering attitudes we have so far, adds St. Louis, and its greatest asset is the growing international database that permits comparisons of individual samples with a great many others around the world. As well, IPATHA is now in a position to develop similar standard measures for stigmas related to mental illness and obesity stigma. The same idea could be used for many other stigmatizing conditions.

The Oscar-winning movie The King’s Speech is a recent public education (and entertainment) project that is likely to have some impact on public attitudes. Research to date suggests that watching the movie has a moderate effect by way of reducing negative attitudes toward people who stutter, and increasing receptivity to information about stuttering that is available from television, radio, and films. Readers are invited to contact Ken St. Louis if they would like to be involved in research involving administration of POSHA-S to measure the changes in public attitudes associated with viewing of this movie, and associated with reading and observing interviews and news stories based on the movie.