The benefits of summer camp for children who stutter 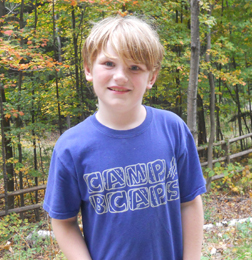 Two years ago, my son Felix (pictured at left) was nine years old and developing an increasingly pronounced stutter. Ever since he could speak, he would go through months of relatively fluent speech, followed by weeks of severe disfluency. I wasn’t worried. I focused on what he had to say, not on how he was saying it. But one day at the library, Felix got stuck on a word and couldn’t ask for a title of a book. This kid, who has always arranged his own play dates by phone and once called Canada’s top Olympic Archery coach to ask about lessons, cried and asked me for help. I knew then that I’d been denying how much Felix’s stutter was affecting him.

We had a dilemma. On the one hand, Felix’s speech was beautiful the way it was. I wanted Felix to know that. On the other hand, I wanted him to have the option of saying words when and how he wanted to say them. I wanted him to increase his fluency, if possible. My solution was to start him in speech therapy to expand his options, to learn what could be, and at the same time, send him to camp where he could be himself, without any modification.

The only camp in Canada that I could find for kids who stutter (that was not a speech therapy camp) was Camp BCAPS (British Columbia Association for People who Stutter). It was a long trip from Ontario, but it was everything I hoped it would be. Though Felix had attended several schools, he had never met another human being who stuttered, and Camp BCAPS was filled with kids and grown-ups who either stuttered or had had exposure to stuttering. Felix connected easily with the other children without having to explain himself, or, as he put it, apologize. The speech language pathologists (SLPs) who organized the games and talks on stuttering really brought the activities to life, and linked the camp in a subtle way to the fact that help is out there. One SLP in particular took a special interest in Felix, and while I was busy reminding him to raise his hand before speaking and to give others a turn, she gave him her megaphone! The confidence boost he got from the camp experience had a ripple effect on his (and our family’s) life far beyond those few sunny days. Before he went to BCAPS, I was afraid the stutter was the result of a deep insecurity, a doubt at the root of Felix’s soul. After BCAPS, I saw his stuttering as just one more thing he does. If there is an emotional component for him, it is the intensity of his wish to connect with others – the leap at the root of his soul.

Very soon after we got back from British Columbia, Felix gave a talk to his sister’s grade 5 class on stuttering, in order to pave the way for future stutterers those kids might meet! He cited statistics, told the kids about tools that can increase fluency, and really got their attention when he gave examples of being misunderstood and laughed at by adults. Sure enough, he was the only kid they’d ever met who stuttered, and he was excited to help them understand something new.

There are currently no camps in Canada for children who stutter. However, choosing any kid's camp in your region can be beneficial. The camp experience can be rich and meaningful for any child. Talk to the camp coordinators about your child's stuttering, mentioning that he/she does not need special treatment, but they should be aware of the situation.