Book about boy who stutters a moving read 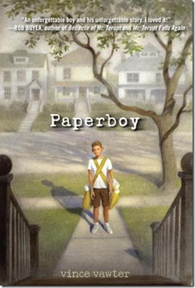 Paperboy is a story about an 11 year old boy who stutters. It is part memoir and part fiction, written by Vince Vawter. For over 60 years the author “stuttered fiercely, sometimes gently” yet he was able to overcome his speech impediment and lead a successful career in newspapers. The backdrop of the novel is Memphis 1959 – segregation is the norm. Two major themes explored in Paperboy are the speech challenge the protagonist experiences, and the racial tension in the South.

As a person who stutters, I was able to relate to the Paperboy’s inner turmoil. Overwhelmed by speaking, the Paperboy substitutes words. He calls his best friend "Rat" because it is easier to say. He blocks on words and cannot say his name. He also feels ashamed when he can not order food at a restaurant, and everyone at his table laughs.

Reading about the protagonist’s speech challenges brought back real memories for me. I experienced it all, except I did not substitute words – using fillers, “-ums”, instead. The effect on me was déjà vu - I was reliving stuttering moments through the awkwardness that the Paperboy felt about his speech. At one point I had to take a couple of days break from the book before resuming reading it. Even though the Paperboy struggles and felt uncomfortable, he never ceases to communicate. He either forces the words in a scream or employs his speech therapist’s technique – "gentle air". He does not realize that this was strength in itself.

The Paperboy grows when he accepts the responsibility of his best friend’s paper route. At first, he fears knocking on doors, introducing himself and collecting payment. But he persists, and meets characters who help him change his attitude. He realizes that his “soul doesn’t stutter” and the people he delivers to acknowledges his soul – his identity. He is more than his stutter and the context of what he says is more important than how he says it. This revelation brought back the same feeling I had when I came to term with my own speech.

I encourage readers to complete the book even though it may bring to mind painful memories. It may give them hope that their identity is not dependent on their speech but other qualities they have developed. Further, I recommend this book to anybody interested to learn more about a stutterer's speech challenges and how he overcame it in a fluent world.

Paperboy is available at Chapters